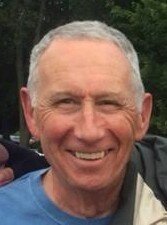 Please share a memory of Charles to include in a keepsake book for family and friends.
View Tribute Book

Charlie “Corky” Kiggins, 80,  passed away on Saturday, July 30th, peacefully at home surrounded by loved ones after valiantly living with Alzheimer’s.  Charlie was the son of Charles L. and Mary Burke Kiggins and as a young child traveled with his mom around the country while his dad served in the US Army.  Corky grew up in Syracuse where he attended St. Anthony’s of Padua High School and made many life-long best friends.  Throughout his life, Corky remained a faithful St. Anthony’s alum.  Charlie met the love of his life, JoAnne Kochman and married her in 1966.  After their marriage, and start of their family, Charlie and JoAnne began their dedication of service to St. Margaret’s Church.  Charlie kept busy over the years as the CYO Director of Athletics, co-captain of Bingo Team 3, co-chair of several Summerfests at Long Branch park, and a volunteer with Human Development, leading him to serve on the Diocesan Human Development Committee.  As his Alzheimer’s progressed, he no longer could formally volunteer, but he became the friendly greeter to many at Saturday evening’s mass.  After a stint in the Army National Guard, Charlie started his career with Niagara Mohawk where he worked for over 30 years, retiring at the young age of 52, as their liaison to the Public Service Commission.  In retirement, Charlie dabbled in various
activities while keeping busy caring for the older adults in his life.  He spent time as a “handyman” and crafting mission-style lamps.  Charlie and JoAnne enjoyed years of camping with friends and traveling with his best friend and travel planner, Ed Carey, to many destinations including Ireland, Alaska, and the Caribbean.  Charlie enjoyed a rich life where he was often the life of the party with his vibrant personality and sense of humor.  He even joined the Pastime Athletic Club to ensure it would be mentioned in his obituary. Charlie’s love will live on with his wife of 56 years, JoAnne Kochman; his sons Jeffrey & Christopher both of North Syracuse; his daughter, Kelly (Chrissy Mascato) of Syracuse; his grandchildren, Gabriella and Carter of East Syracuse; his brothers, Russell (Donna) of Syracuse and William of Camillus; along with his Aunt Diane Graham, several nieces, nephews and cousins.   Special thank you to Deb Moore for her compassionate care of Charlie during his last stages of life.
Charlie’s life will be celebrated at St. Margaret’s Church on Friday, August 5th.  The family will hold visitation beginning at 10:00 a.m. followed by a mass of Christian burial at 11:00 a.m.  To honor Charlie’s memory, in lieu of flowers, please consider a donation to one of the following:  St. Anthony’s of Padua, Syracuse; St. Margaret’s Church food pantry, Mattydale; or Hospice of Central New York, Liverpool.  Private internment will be in St. Joseph’s Cemetery in Auburn, NY.
Online condolences and a live steam of his mass will be at www.shepardsonfh.com.

To send flowers to the family or plant a tree in memory of Charles Kiggins, please visit Tribute Store
Friday
5
August

Share Your Memory of
Charles
Upload Your Memory View All Memories
Be the first to upload a memory!
Share A Memory
Send Flowers
Plant a Tree