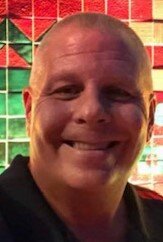 Please share a memory of Michael to include in a keepsake book for family and friends.
View Tribute Book

Michael William Dunne (Mike), age 57 died unexpectedly October 16, 2021 on Wolfe Island, Ontario, Canada. He left his family and friends way too soon; all who knew him are shocked and deeply saddened.
Mike was born in Syracuse, NY to M. Joseph (Joe) and Elizabeth (Betty) Dunne. He graduated from St. Margaret’s Elementary School, Bishop Ludden High School and Siena College. He was a lifetime member and co-trustee of St. Margaret’s Catholic Church and of Sacred Heart Church, Wolfe Island. During his high school and college years, Mike participated in football and lacrosse. After completing ROTC training and graduating from Siena College in 1986, Mike was commissioned as a Second Lieutenant, US Army. Mike then joined the US Army Reserves and began working in banking with Marine Midland, M&T Bank and until his death, Empower Credit Union. He also was a past member of LeMoyne College, Syracuse, NY Board of Regents.
Major Mike Dunne retired from the US Army Reserve in 2009 with over 20 years of service. He was a valued member of several units during his career including the 403th Civil Affairs Battalion, the 425th Civil Affairs Battalion and the 18th Airborne Corps. He was called to active duty multiple times, serving in Saudi Arabia, Kuwait, Bosnia, Afghanistan, and Iraq.  His awards include the Armed Forces Expeditionary Medal with Oak leaf cluster and NATO Medal (for service in Bosnia), Southwest Asia Service Medal with 2 Bronze Service Stars (for Operation Desert Storm), The Afghanistan Campaign Medal with Campaign Star (for Operation Enduring Freedom), the Iraqi Campaign Medal (for Operation Iraqi Freedom), the Army Commendation medal with 2 Oak Leaf Cluster, The Navy Commendation Medal, the Meritorious Service Medal, and  The Bronze Star Medal with Oak Leaf Cluster.
Mike derived much pleasure in spending time with family and friends at his family’s cottage on Wolfe Island, which he missed terribly when the pandemic restrictions prevented him from getting to the island.  He is well-known for posting numerous pictures and videos of sunsets from Wolfe Island. Mike had a passion for golfing. Mike closely followed SU football and basketball, even calling his parents from Afghanistan in 2003 when the SU basketball team won the National Championship.
Mike is survived by his daughter, Kerry Rose, of Syracuse, NY; wife Joanne, of Clay NY; his parents Betty and Joe Dunne, sister Kathleen (Kathy) Dunne and niece Amanda Ferguson, all of Naples, FL. He also leaves behind many relatives and close friends who have huge holes in their hearts from his passing.
Visitation for Mike will be Monday November 1st from 3-6 pm at Goddard-Crandall-Shepardson Funeral Home. The funeral mass will be celebrated on Tuesday November 2nd at 10 at St. Margaret’s Church, Mattydale, NY. The family request that everyone wear face masks, regardless of vaccination status. The mass will be livestreamed on Michael's page at www.shepardsonfh.com.
In lieu of flowers, the family requests donations to St. Margaret’s Catholic Church, 203 Roxboro Rd, Mattydale, NY 13211 or the Sacred Heart of Mary Catholic Church, Wolfe Island, Ontario, Canada, K0H 2Y0.

To send flowers to the family or plant a tree in memory of Michael Dunne, please visit Tribute Store
Monday
1
November

Share Your Memory of
Michael
Upload Your Memory View All Memories
Be the first to upload a memory!
Share A Memory
Send Flowers
Plant a Tree