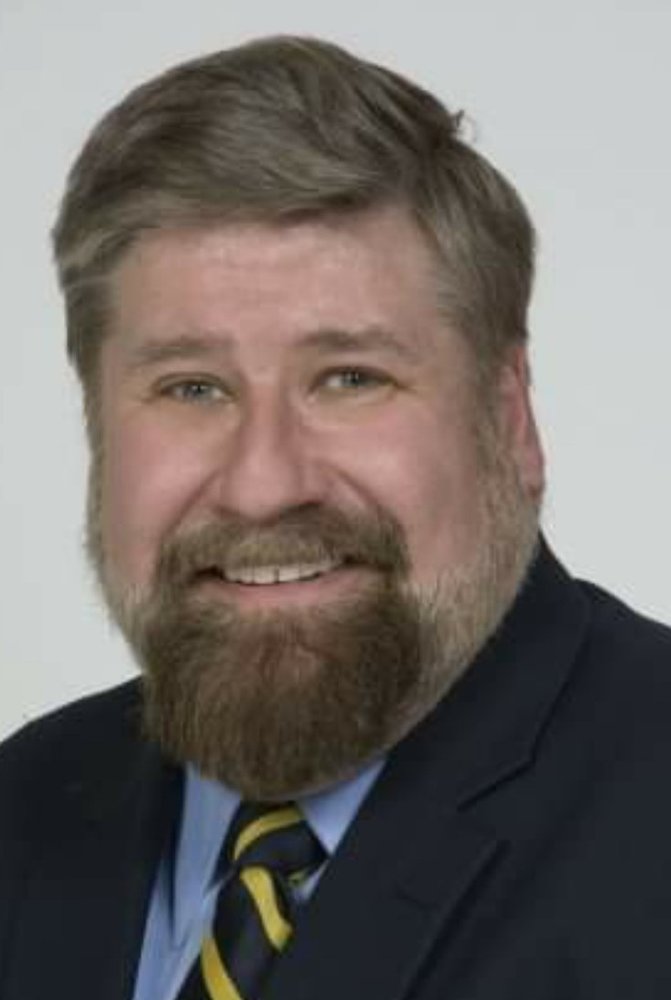 Please share a memory of John to include in a keepsake book for family and friends.
View Tribute Book
John Mackenzie “Mac” Sabol, 63 After a courageous battle with leukemia (AML) that began in February, Mac passed away on May 4th at Crouse Hospital as a result of serious complications. Mac was born in Sumter, South Carolina to parents Betty and John Sabol and has a younger sister, Jan. He graduated with a Masters degree in Choral conducting from Bowling Green State University (OH) where he met his wife, Julianna, also majoring in music. They were married after graduation and celebrated 37 years of marriage last August, 2020. It was at BGSU that Mac was first introduced to barbershop singing by BGSU voice faculty and choral director, Richard Mathey. From that time on, Mac became active both as a director and member of barbershop choruses and was also lead (and baritone) in quartets in cities where he lived and worked (Platteville, WI; Cincinnati, OH; Syracuse, NY; Buffalo, NY; Binghamton, NY). As a barber shopper, Mac’s talent lay in his leadership roles. He played a prominent and integral role across Seneca Land most recently and beyond for many, many years. Mac treasured his interactions with barber shoppers wherever he went. When travelling and working out of town, he always made a point of visiting a barbershop chapter at their weekly rehearsals and showing up to sing and often coach. The act of making four-part harmony and the dedication to creating music which tells a story with genuine emotions that connect with an audience was something that Mac treasured. Mac’s main career and love was as a Human Resource Specialist. His mentoring spirit played an important role in the numerous leadership roles he held in various companies in central and western NY. He cared for his fellow workers and employees, and found organizational development concepts fascinating and important in his work. When he wasn’t singing barbershop or doing HR work, Mac was a “Jack of all trades” who loved mechanics in many forms: working on electrical and mechanical home projects, including his most recent purchase of a Safari Trek motor home which he bought virtually online in Utah in August and drove back to Syracuse. He enjoyed making mechanical improvements on the motor home as well as planning state park camping trips. No matter what Mac was involved in, whether it be barbershop singing, HR work or simply having a conversation, he had the gift of being a good listener and making a personal connection with whomever he was interacting with. Because of some of the struggles he went through in his life, Mac was able to transform the wisdom he gained from these experiences into helping and connecting with others. He chose to interact in challenging situations in a dignified and honorable manner, as he did in all his human interactions. He truly touched the lives of all he worked with. As one Seneca Land barbershopper wrote: “His soaring voice, gracious heart, and constant positive presence will be sorely missed by all of us.” A private funeral service will be held. Plans will be made for the possibility of a gathering of a larger group of friends and barber shoppers from Seneca Land District sometime in the future to celebrate Mac’s life. In lieu of flowers, contributions may be made to: University United Methodist Church Outreach Ministries, 1085 E. Genesee St., Syracuse, 13210.
To plant a beautiful memorial tree in memory of John Sabol, please visit our Tree Store

A Memorial Tree was planted for John
We are deeply sorry for your loss ~ the staff at Goddard-Crandall-Shepardson Funeral Home, Inc.
Join in honoring their life - plant a memorial tree
Online Memory & Photo Sharing Event
Online Event
About this Event

Look inside to read what others have shared
Family and friends are coming together online to create a special keepsake. Every memory left on the online obituary will be automatically included in this book.
View Tribute Book
Services for John Sabol
There are no events scheduled. You can still show your support by planting a tree in memory of John Sabol.
Plant a tree in memory of John

Share Your Memory of
John
Upload Your Memory View All Memories
Be the first to upload a memory!
Share A Memory
Plant a Tree