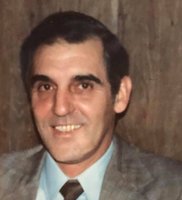 Anthony James Notarthomas, 84, of Syracuse, passed away on September 17 th after a long illness. He was at home, surrounded by his loving family. Born on June 11, 1936 to Joseph and Mary Notarthomas of Hawley Avenue in Syracuse, Anthony was the youngest of eight siblings. A superb athlete, he graduated from Central High School where he was Class President, a NY State Champion in track and field, and a member of the football and gymnastics teams. A competitor in the 1955 US Olympic trials on the pommel horse, he continued to judge collegiate gymnastics meets throughout Central New York in the 1960’s and 70’s. On December 1, 1956 he married the love of his life, Anna Mae Wrenn of East Syracuse. Together, they raised a family of seven children in a home overflowing with music, boisterous voices, yelling, laughter, and love; the classic Irish Italian household. He worked as an independent insurance agent forging meaningful and lasting relationships over a 40-year career. An accomplished pianist, he devoted countless hours mastering the classics, creating a living family soundtrack of Chopin, Gershwin, and Rachmaninoff that echoed through the neighborhood, and instilled a deep appreciation and love for music in his children and grandchildren. Over the years, he enjoyed golf, cards with friends, fishing, watching the Syracuse Orangemen, and immersing himself in that which was closest to his heart; his marriage to Anna Mae, and his family. He was a good and honorable man. He was loyal and honest to a fault with friends. Above all, he was a loving husband, father, and grandfather. In addition to his parents, he is predeceased by his sister, Jane Schiano; sister, Marie Barnes; sister, Anita Ferris; sister Vera Palmere, brother, John Notarthomas; and brother, Joseph Notarthomas. He is survived by his wife Anna Mae, his sister, Sister Paula Marie “Rita” Notarthomas, of Buffalo, NY; daughter, Anne Marie Notarthomas, of Syracuse; son Anthony Notarthomas, and wife, Stephanie, of Woodstock, GA; son Jon Notarthomas, of Austin, TX; son Jamie Notarthomas, and partner, Melinda Sarkus, of Syracuse; son Danny Notarthomas, and wife, Lisa, of Wappingers Falls, NY; son Michael Notarthomas, of Austin, TX; and daughter, Mary Notarthomas, of Syracuse. In addition to his many nieces and nephews, he is the very proud “Papa” to seven grandchildren: Kaylea, Erin, Madison, Ian, Riley, Ashley, and Annabelle. The Notarthomas family is so grateful for the staff and volunteers at Francis House and the loving care from Allison and Hospice of Central New York. Mass of Christian Burial will be held Thursday September 24 at 10:30 am at Blessed Sacrament Church with burial to follow in St. Mary’s Cemetery. Friends may call at the Goddard-Crandall-Shepardson Funeral Home, Inc. Wednesday from 4-7:00pm. On line condolences at www.shepardsonfh.com. In lieu of flowers, donations can be made to Francis House in Syracuse, NY.