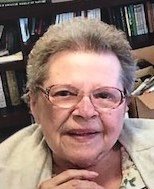 Katherine (Bogart) Nemier, formerly of Syracuse and Liverpool passed away peacefully on August 7, 2020. Mrs. Nemier was born in Syracuse, graduated from Nottingham High School and Central City Business Institute. She was a member of the Reformed Church of Syracuse, a 50 year member of Bona Fide-Hiawatha-Solvay Chapter # 567, Order of the Eastern Star and was a past Matron of the Solvay chapter. After working in various investment firms she retired in 1996. She also worked as an election inspector for many years. Katherine was predeceased by her husband Carl in 1993 after 36 years of marriage, and by her daughter Rebecca Torak in 1989, and her parents: Frank & Vera Bogart. She is survived by her son Brian (Michelle) of Liverpool; granddaughters: Stephanie Torak, Carolyn (Chris) Slobodian; a grandson Eric Nemier; and great grandchildren: Leah and Finley. Calling hours and burial are private. In lieu of flowers, donations can be made to the Eastern Star Home and Campus 8290 State Route 69, PO Box 959, Oriskany, NY 13424.