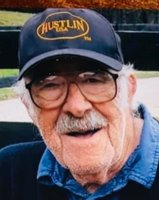 Angelo Mario LaBella, 95, died June 6th. He was born in Alatri, Italy, lived most of his life in Syracuse, NY until recently when he moved to Milton, GA. He was a WWII Veteran proudly serving from 1943-45 in Battery 252nd Field Artillery Battalion in Normandy, Northern France, Belgium and Central Europe. He received a European African Middle Eastern Service Medal, a Good Conduct Medal and a New York State Medal for Merit. He was a member of the United States Trotters Association and a horse trainer for 50 years; not officially retiring until he was 90 years old. At the young age of 80, he had one of his greatest successes with a horse called “Hands to Yourself” who had over $150,000 in winnings under his training and took third in the Sire Stakes Race in 2007. He was loved by everyone in the horse business and especially will be missed by everyone at Vernon Downs and the Syracuse Mile. Angelo was predeceased by his brothers, Americo and Joseph and his sister, Fatima Mirra all of Syracuse. Angelo was a kind, humble and gentle soul who loved life, his family & friends, horses, gardening and a good Bloody Mary. He was loved and adored by his nieces and nephews and is survived by his nieces Dr. Lori Mosca, Diane Maloney, Mary Badger, Christine Sherwood and Pauline Shanley and his nephews Joseph A. LaBella, Dr. John LaBella and Mario Mirra. He also enjoyed spending time with his 12 great and his 3 great- great nieces and nephews. A private funeral service with a military salute and taps is planned for June 27th at Assumption Cemetery in Syracuse. He will be laid to rest next to his brothers Joseph who served in the Army and Americo who was killed in action during the Korean War.