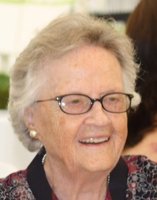 On Wednesday, April 29, 2020 Bernice Wilsey Fisk passed away at age 96. A native of the Adirondacks, Bernice, known as Bunny to her friends, was born in 1923 in Saranac Lake, NY to Harrison and Myrtle Wilsey. In 1941, she attended business school in Syracuse where she met and married Seward C. Fisk. Together they raised five daughters, moving from the Rochester area to Fayetteville and eventually settling the family in Cazenovia in 1960. During WW II, she served as a member of the Red Cross Nursing Aid Corps. Bunny was employed from 1960-1988 at Syracuse University where she was the Registrar for the Graduate School. She was an enthusiastic SU sports fan attending both basketball and football games and followed the teams to many bowl games. She was a member of the SU Orange Pack. Bunny was an avid reader, and enjoyed gardening, bird watching , boating and camping trips in the Adirondacks. After retiring she enjoyed traveling to Europe, Hawaii, and wintering in Hollywood, FL. Bunny was predeceased by her husband Seward C. Fisk, sister Ethel Bendit (Boca Raton, FL), daughter Janice Fisk Keane (Geneseo, NY), daughter Carol Fisk Nagel (Cazenovia, NY), and granddaughter Kathleen Keane Carney (Breckenridge, CO). Surviving Bernice are daughters Darleen Fisk (Manlius), Peggy Ralph (Jon) ( Lucerne Valley, CA) and Bonnie Eno (Manlius), 8 grandchildren and 19 great grandchildren. Bunny will be remembered for her kind and compassionate spirit, her love of nature and her unconditional love for her family. A private service is planned.