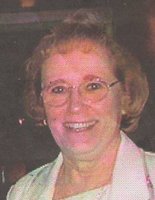 Janet (Gaynor) Barry, 87, of Eastwood, passed away on Sunday, March 8 at her home surrounded by her family. She was a graduate of St. John the Evangetlist High School and Central City Business Institute. She worked as a secretary in the Contract Bond Department of American Surety Company and Bowen, Perry and Fobes Insurance Agency. After her children were grown, she worked as Confirmation Coordinator and Parish Secretary for 35 years at Blessed Sacrament Church. She was President of Blessed Sacrament Home School Association, the Parish Council and a parish representative on the Diocesan Council. She was also an officer of the Syracuse Insurance Women's Association, on the Board of the Eastwood Neighborhood Assn. and St. Joseph Manor Senior Housing. Janet was pre-deceased by her parents: William and Exzilda Gaynor; her husband, Bernard "Bud" Barry; her brothers: William, Thomas and James Gaynor; and her sister, Patricia Greenway. Surviving are her son, Steven Barry and daughter, Alicia (Missy) Butler; seven grandchildren: Ireland, Daniel and Keegan Barry and Kacey, Noah, Brandon and KellyJo Butler. A special thanks to Janet’s care givers: Jackie Muldoon, Debbie Lukasiewicz and Tammy LaManna. The funeral services will be held on Friday at 10am in Goddard-Crandall-Shepardson Funeral home and at 10:30 in Blessed Sacrament Church. Burial will follow in St. Mary’s Cemetery. Calling hours are Thursday from 4-7pm at the funeral home, 3111 James St. Donations in memory of Janet may be made to Blessed Sacrament Church or Francis House.