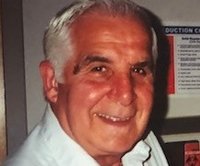 Michael Fortunato, Sr., 95, passed away December 25, 2020in Syracuse, NY. Born in Dunmore, PA the son of John and Carmella Minnonna Fortunato. He lived in Eastwood most of his life. He retired in 1982 after 32 years in the freight business with several trucking companies. He was a member of the Teamsters Local # 317 and the Teamsters Retirees Club. Michael was a Navy Veteran of WW II and served in both Atlantic and Pacific Theaters. He also served as an Usher at Blessed Sacrament Church. Michael is predeceased by his wife, Josephine, son John and brother Armand Fortunato. Surviving are his son Michael Jr. (Kathy) of Syracuse, sisters Julia Hirsch of Liverpool and Delouvia (Judy) Comestro of Syracuse, grandchildren Michelle Keenan of Central Square and Stephanie Roche of Montgomery, NY, great grandchildren Morgan and Jake Keenan. Private services will be held at the Goddard-Crandall-Shepardson Funeral Home, Inc. Burial will be in the Woodlawn Mausoleum. Contributions may be made to Blessed Sacrament Church or to your favorite charity.