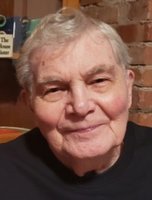 Robert D. Conine, 91, of Syracuse, passed away peacefully on Friday, December 11, surrounded by his loving family. He had received his Masters Degree in Engineering from SU and worked at Carrier as an aerothermodynamist. He was probably the longest employee at Carrier, retiring when he was 88. While with Carrier, he traveled to many foreign countries during his career. He also served with the US Army in Korea. Mr. Conine was a devoted member of Westminster Presbyterian Church for many years and served as an Elder, Deacon and Treasurer. He had many hobbies but his great ability was to take something apart, figure out what was wrong and putting it back together. There was nothing he couldn’t fix. He was also a great gardener and loved working in the yard and was an avid HO train collector. He will be greatly missed. He was a loving, devoted father, grandfather and friend. He is survived by his wife of 66 years, Joan; children: Rick (Patty) of Ft. Lupton, CO, Stacey (David) DeSocio, Robin Cannata, Vanessa Conine, Heather Jones all of Syracuse, Rachel (Michael) Sullivan of Fulton; 7 grandchildren; and several nieces and nephews. Calling hours will be held on Friday, December 18 from 4-7pm at the Goddard-Crandall-Shepardson Funeral Home. Funeral services and burial will be private. In lieu of flowers, memorial contributions may be made to the American Cancer Society.