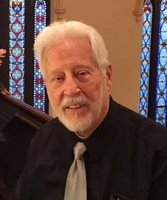 William “Will” O. Headlee, 90, passed away peacefully at Crouse Hospital. Will was Professor emeritus and University Organist emeritus at Syracuse university. He came to Syracuse to study with noted organist Arthur Poister and earned the MMus in 1953, following undergraduate work at the University of North Carolina (Chapel Hill) with Jan Philip Schinhan. He retired from SU in May 1992 after 36 years of varied academic responsibility and continuous choir directing activity, including six seasons with the Hendricks Chapel Choir. He has been active in the American Guild of Organists and the Organ Historical Society, performing at many conventions. He served as Organist at Park Central Presbyterian Church from 1992 until his passing. Burial will be private. A celebration of his life will be held at a later time.